Tricks to Solve Percentage Problems : – Dear Candidates, are you preparing for Banking, Insurance, Competitive Exam or Entrance exams? Candidates will likely need to solve a section on Quantitative Aptitude for sure. Percentage Quiz IBPS, RRB, & SBI will help you learn concepts on an important topic in Numerical Ability Speed, Time & Distance.

How to Solve Percentage Problems

To increase a number by a given percentage(x%):

Multiply the number by the following factor

To decrease a number by a given percentage(x%):

Multiply the number by the following factor

To find the % increase of a number

To find the % decrease of a number

If the passing marks in an examination is P%. If a candidate scores S marks and fails by F marks then–

Example: – Pankaj Sharma has to score 40% marks to get through. If he gets 40 marks and fails by 40, then find the total marks set for the examination?

Example: – Raj scores 30% and fails by 60 marks, while Rohan who scores 55% marks, gets 40 marks more than the minimum required marks to pass the examination. Find the maximum marks for the examination?

If due to decrements in the price of an item, a person can buy Kg more in y rupees, then actual price of that item –

Example: – Ram can buy 5 Kg more sugar in rupees 100 as the price of sugar has decreased by 10%. Find the actual price of the sugar?

If in an election, a candidate got of total votes cast and still lose by y votes, the total number of votes cast –

Example: – In an election contested by two candidates, one candidate got 40% of total votes and still lost by 500 votes, find the total number of votes casted?

If the population of a town is P and it increases or decreases at the rate of R% per annum then –
I. Population after ‘n’ years :

Example: – The population of a town is 352800. If it increases at the rate of 5% per annum, then what will be its population after 2 years and 2 years ago? 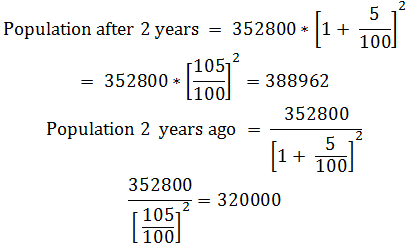 Question: – 10: –  The price of petrol is increased by 25%. How much per cent must a car owner reduce his consumption of petrol so as not to increase his expenditure on petrol?

Thanks to visit the How to Solve Tricks to Solve Percentage Problems | Basic Concept for IBPS, SSC, SBI, RRB Exam. Thanks for visit. Candidates, please share this article on the social networking sites. here we provide you the compete IBPS SBI RRB Quantitative Aptitude Short Tips & Tricks to solve the question. You can get the complete details related the Bank Exam, Recruitment, Syllabus, Exam Pattern, Study Material and others